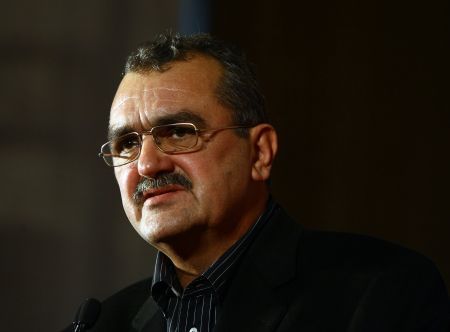 PSD is supporting Oprescu with care, not to harm him

Autor: AdamPopescu 4 iunie 2008
"It's obvious that we must support Sorin, but we must be careful not to cause him a problem."

With the precaution signaled by Adrian Nastase, the PSD leaders discussed yesterday what to do to help Sorin Oprescu win the Capital City Hall. Ion Iliescu was the most trenchant: "We are saying clearly that we are supporting Sorin and we must say clearly that we want the isolation of PDL and Basescu". Mircea Geoana approved this attitude. And he announced publicly. Along with sustaining Oprescu, Geoana said that PSD is supporting Piedone (PC) for sector 4 and Chiliman (PNL) for sector 1 in the second round.

The feeling that the PSD support can do serious damage to Sorin Oprescu was expressed by other social-democrats leaders as well. The general secretary, Titus Corlatean, pleaded for a "dozed support for Oprescu because Blaga shouldn't be favored". Titus Corlatean's opinion was backed by Cristian Diaconescu, the former official PSD candidate for the Capital City Hall. He publicly stated, before the start of the meeting, that he is against supporting Oprescu or Blaga.

"From my point of view, the things are clear. I can't go with Sorin Oprescu and I don't understand why does PSD want from a candidate who, besides detaching from mister Iliescu's ghost, left the party saying «I escaped the PSD masters»", said Diaconescu. More radical than Diaconescu were the PSD Bucharest leaders. Lacking Marian Vanghelie, the organization was represented by the executive secretary, Aura Vasile. She was against supporting Oprescu.

"Sorin started to make phone calls and threaten us that he will come back in the party and throw us out because we opposed his candidateship", complained in tears Aura Vasile to the bosses from the center. Geoana and Mitrea tried to call for an agreement in the party because only this way PDL can be defeated. For the idea of clear support for Oprescu pleaded insistently Miron Mitrea. This fact raised suspicions in the minds of many PSD leaders, like Ion Iliescu and Adrian Nastase. In the discussions from the halls from Kisselef suspicions were formulated that Mitrea's attitude comes from his interest for Oprescu to lose.