Evenimentul Zilei > English section > Sebastian Ghita about the last evening in Romania: „Georgian Pop was pulling me up by the ear” 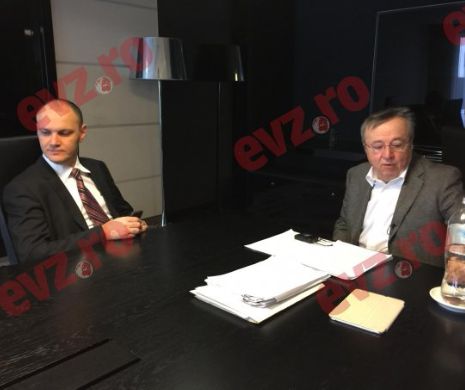 Sebastian Ghita about the last evening in Romania: „Georgian Pop was pulling me up by the ear”

The first episode of the EVZ series has as central figure Sebastian Ghiță. Ion Cristoiu obtained sensational information concerning the Romanian political games behind the scene, but also the most desired confirming of the allegations that Sebastian Ghiță made before he left for Serbia.
Stiri calde

Today, from 21:00, you can watch on www.evz.ro the moment of interview when Sebastian Ghiță shows a photo that persuaded Ion Cristoiu that his interlocutor that he doesn't lie and that he was close to people in the State.

Ion Cristoiu: Tell me… I'm trying to imagine the evening of 19.  You were determined to leave when you've gone?

– Eee. How? You had such a revelation?

– Interesting, a real sensational disclosure. What influenced you at that party that made you leave?

– The attitude towards me.

– All those present there. I realized that Georgian Pop, who until then was a little boy from the Embassy, was pulling me up by the ear. Other older senator was petting me on he the head, more so he almost slapped me. It was obvious that everyone there had been in some way or another informed that the next day I will be arrested, that I have no chance, do not escape, that everything's ready. Yet I am a man who can realize when something bad happens.

“Christmas was coming and my name was Ghita”

"I don't mean to provoke the falling or maintaining of Kovesi"

Ion Cristoiu: Mr. Sebastian Ghita, one of the themes of these recordings as a red thread, and other interventions of your's, is the relationship with the head of DNA, Codruta Kovesi, since the period when she was Prosecutor-General.  In these records you speak about different times showing a fairly close relationship, even friendship with Codruta Kovesi. Let’s see what you were saying in the first record about your relationship with Mrs. Kovesi: "I want to ask Mrs. Kovesi if she remembers the small party from the villa in Sinaia where she with Vasile Dâncu and me partied with musicians and sang at La Chilia in the port, the variant for the rule of law". In the last episode, that from 16 January, you bring new details about the party from Sinaia: "It is very easy to verify the party in Sinaia. It was at SRI Villa in Sinaia. The drivers saw and can witness, also the waiters and the musicians. In the following episodes you will also see the video.  Mrs. Kovesi still does not answer the question: was she or not at that party. But it is abnormal that the state institutions to lie ".

Sebastian Ghita: Mrs. Kovesi reacted on all these truths which you say, she reacted each time, as he reacted immediately after the registration, namely: invited to Europa FM, Mrs. Kovesi said "she was not and will never be friends with the defendant Sebastian Ghita even though he said a few times that they were close enough".