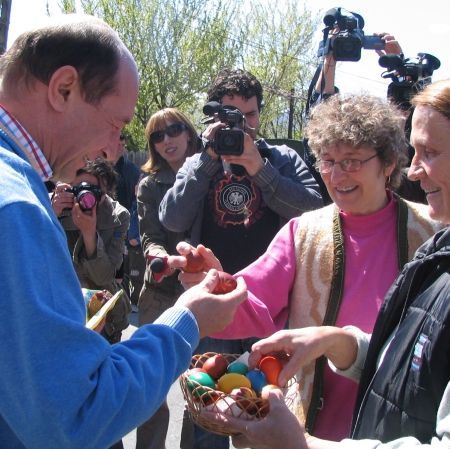 The referendum has passed, but the election campaign continues

Autor: AdamPopescu 4 iunie 2007
Traian Basescu went to Alba Iulia at the end of the week, one of his traditional constituencies that he did not manage to visit before the 19th of May.

“Beyond the pleasure of being in a city which celebrates its birthday, I have a feeling of gratitude for the people in Alba Iulia , because, since 2004, they have been my constant supporters, and I couldn’t miss the city’s anniversary”, said the president.

The president reached Alba Iulia around 16.30, after he had spent the night in Olanesti. The first stop was at the Parc Hotel, where they checked in. There, they found a wedding while taking place and Basescu was photographed with the bride and groom. Then, the president took off by foot to the city hall where he had a private conversation with the mayor Mircea Hava, and other county officials.

After the meeting at the city hall, the president visited the recent restored Vaudian style fortress in Alba Iulia, where he was greeted with bread and salt by a delegation from Oradea dressed in medieval clothing.

Three hours in the pool

The president spent the night between Friday and Saturday at a protocol villa in Olanesti. Being tired after the events which took place lately, he took a three hour bath in the famous basement pool. Saturday morning, Basescu initially wanted to go to Horezu, to the 37th pot makers anniversary, but he left by helicopter straight to Alba Iulia . He returned to Valcea on Sunday afternoon, to visit the Bistrita and Hurezi monasteries.

Stolojan negotiated with the pot makers

Unlike Basescu, the PLD president, Theodor Stolojan went to the Romanian pot makers’ celebration, which took place on Saturday morning in Horezu. He bought ceramics from all over the country, but he negotiated the price thoroughly, and he also organized a press conference at the fair.