Evenimentul Zilei > English section > Ghita, face to face with Ion Cristoiu, in episode 2 of the interview in Belgrade: „You rarely saw Kovesi without Coldea” 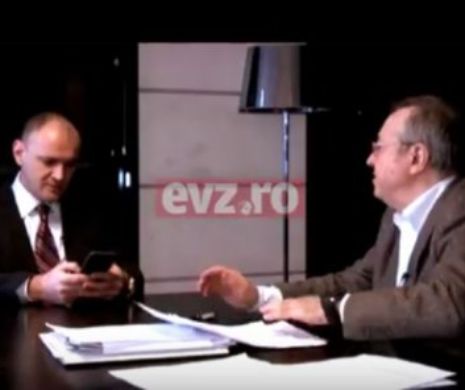 Ghita, face to face with Ion Cristoiu, in episode 2 of the interview in Belgrade: „You rarely saw Kovesi without Coldea”

The first episode of the interview taken by Ion Cristoiu to Sebastian Ghiță ended when the former Deputy shows him a photo from his phone.
Stiri calde

In this second episode, the former Deputy talks about the people who appear in the picture, along with Laura Codruta Kovesi. The photo was taken at Ghita's home in Ploiești.

In today's material, Ghita speaks in detail about the parties organized in SRI villas on the occasion of the anniversaries of Florian Coldea, the businessman also speaking about the stories of those who participated in these events.

Wednesday night, after broadcasting the first part of the interview recorded in Belgrade, Sebastian Ghita and Ion Cristoiu were called from Romania TV studio.

Ion Cristoiu spoke about the backstage of the registration. He said that Sebastian Ghita revealed him that the first targets of the parallel State have been the press companies. The former lawmaker also told Cristoiu that a paper found now in the criminal case tied to possible corruption of voters in the Republic of Moldova, in the fall of 2014, was actually a document from an operation organized by the Romanian State that had no connection with electoral scrutiny and which Ghita would have given to Florian Coldea. Basically, Ghita is saying that the document of a State action that he attended was sent by Florian Coldea to DNA, though the former first Deputy of SRI was one of the organizers of the action. Cristoiu also said that Ghita left him the feeling throughout the 4-hour interview that he would protect the SRI.

About the the documents from Sebastian Ghiță's dossier regarding the connection with the elections in Moldova Vlad Cosma also made disclosures.

Located in the Studio, journalist Dan Andronic recalled a detail from the record of the interview: "there was a discussion about the pictures in Paris (with Elena Udrea and Alina Bica) how did they get in the press, who called Sebastian Ghiță to retrieve an IP address where the pictures were going to be on for a few hours."

Ghita: "Kovesi deals with the removal of Romanian companies off the market"

Sebastian Ghita intervened by phone Wednesday evening at Romania TV. "I haven't yet seen the Romanian Parliament to praise DNA.  Only the embassies receive and decorate this DNA. First and early supporters of this Binomial are those from the U.S. Embassy. You have seen then the Dutch Embassy, Embassy of France or England", said Ghita. According to Ghita, the Dutch Ambassador would have a criminal record, at the Court of appeal. "There is also a public file, investigated by the Romanian authorities, at the Court of appeal, and where clearly and obviously the Dutch Ambassador was caught stealing with an Arab citizen. Mrs. Kovesi handles those interests that are not beneficial for the Romanian State and the elimination from the market of Romanian companies and interests, and to me this stuff doesn't sound like an institution (within the Romanian constitutional context (…) Mr. Dragnea told me about the Ambassador of Belgium, who boldly came up to him in the Office and said, "give me the North Train-station without auction", to make a real estate project. There's no Minister in Romania that does not tell, how, when they were invested, couldn't push the door how many ambassadors were there and had no room to enter because of them" said Ghita.

We now continue with the publication of the interview.

"At one of those meetings, which later showed-up Victor Ponta, was also Codruța Kovesi"

Ion Cristoiu: You also had a wine cellar there?

Sebastian Ghita: there isn't a wine cellar there; there is a vineyard, near Mizil, which has a small restaurant and where I negotiated once in a while, in the fall. And at one of those meetings, which later Victor Ponta showed-up, was also Codruța Kovesi.

"I'm going to tell you something, Codruta rarely came to these meetings without Florin"

I sat in the queue like everyone else. "Hello. I'm Sebastian Ghiță”

Ion Cristoiu: and he often came together with Codruța Kovesi.

Everyone would have wanted to reach out to as many parties and as small as possible, but not many did.

Sebastian Ghita: spontaneously like every one at that meeting.

Traian Basescu refused the invitations to these parties.

Who celebrated its birthday in SRI locations?

"I don't think the dismissal of an official, particularly the goddess of anti-corruption, can be made by running films and pictures with the locations of the Service".