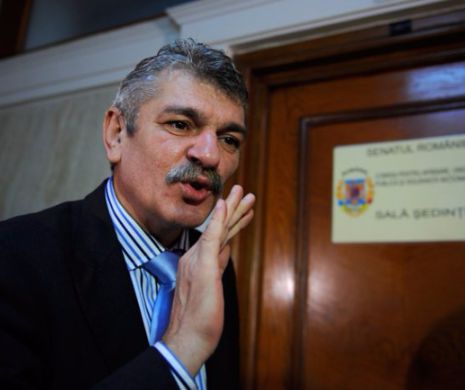 Director of the STS: „I haven’t had talks with Oprea, Kovesi, Basescu or Maior” | „WE ARE THE STATE!” (XIX)

Autor: AnaPetrescu 2 noiembrie 2017, 20:06
At the hearings of the Special Commission that investigated presidential elections from 2009, head of STS, Marcel Opriș, said that his institution would not have been asked to get involved in other elections, if there had been "real problems" at those from 2009.

Vasile Blaga did not wish to comment on the revelations of Dan Andronic, and Catalin Predoiu stated that he had never worked with SIE and STS, when he was the interim at MAE.

General Marcel Opriș also said he sees no sense to which it would be appealed to the STS during the national referendum in 2012, 2014 presidential elections or locales elections from 2016, if the institution wouldn't have done its job effectively and correctly. "All the documents produced have been verified and submitted to BEC.  There were also decisions dedicated to BEC.  It is true that by then the data collected were not made public, station by station. At the end, there was also issued a White Paper on the electoral process that has been submitted to the Parliament of Romania.  I have here some quotes. I don't remember that in this White Paper to have been any word that imputed STS something in relation to elections in 2009. If it had been real problems related to the establishment in 2009, I don't think that the institution would have been invited to participate in other elections, and there have been enough, "explained Opriș. "STS is a technical service, not intelligence" Asked at the hearing if he got in touch with Gabriel Oprea, Florian Coldea, Laura Codruta Kovesi, Traian Băsescu or George Maior, the night when the results were published, Opriș replied: "I've never had discussions with them (-n. r. ). At 01.30 I went to bed and slept in the election night. I had enough work. "He also stated that he coordinated then aspects of telecommunications and held to make the distinction between the STS and other services. ”STS is a technical service, not one of intelligence, even though it has military status. We take care of the communications. In Romania, like other countries, those dealing with communications, also deal with the elections" explained Opriș.

Blaga did not want to comment on Andronic's revelations.

The former Minister of Internals who was suspended at the time of the presidential from 2009, Vasile Blaga, did not want to comment on Dan Andronic disclosures, that he had received a phone call from Basescu in the evening when the election results were presented, around 20.00 o'clock. "I have nothing to comment. No one could know. We gave the equal exit polls at 21.00. We were never wrong. We worked at the hundredth with CSOP. And so it was in the country, equal. The Exit polls was in Romania, those from abroad were not asked. But at around 19.00, 19.30 they were confident" said Blaga.

Coffee with Videanu and Berceanu

Asked, in the context of the hearing, by PMP Deputy, Robert Turcescu, what happened in his visit to the headquarters of the Ministry of Internals, the day after the election, Blaga replied: "I have strictly complied with the decisions of the Court of appeal in Bucharest. There were presidential elections, so obviously I've delegated the powers to the State Secretaries. I have been the suspended Minister of Internals, so I could have very well been sitting in my office, I came, read the newspaper and there was no problem. I entered the Ministry of Internals the day after the elections; I congratulated the Ministry for the way the elections were organized. Obviously I drank coffee with two Ministers, with Mr. Berceanu and Mr. Videanu. It is my right to invite any colleague from Government to the Ministry.”

He also said to the Special Commission that he learned from the press about the meeting in Gabriel Oprea's home on election night, but does not consider that the persons present had how to influence the outcome of elections. Blaga added that he was not the head of the campaign, but Gheorghe Flutur, former senator PDL.

Predoiu: "SIE and STS have not even given us coffee"

Former interim Minister of Externals, Catalin Predoiu, told the members of the Commission of inquiry that he had not been informed of any collaboration between MAE and SIE or STS in presidential period from 2009. "I have not been informed in any moment of such institutional cooperation. I do not want to be misunderstood.  Sure the Minister of Externals receives information from SIE or STS, but nothing came to me in the presidential election period. There has been no political interference, neither institutional in this group. We haven't even get coffee, if you want to know" said Predoiu.

Asked if there was any cross-party understanding, Predoiu replied: "I wasn't a party member back then, and I didn't want to be any suspicion, nor as Foreign Minister or as Minister of Justice. When I was asked by Prime Minister Emil Boc to take this mandate, I raised this issue. Nor was it discussed, nor was in our philosophy political matters. I asked the Prime Minister not to ask me to make changes in the MINISTRY of FOREIGN AFFAIRS. I haven't changed anybody there.”

The former Foreign Minister has also stated that there were no incidents in the diaspora at the second round of elections, when polling stations from abroad have been supplemented. He added that the way in which Ministry of Foreign Affairs functioned then has been regulated by the Government and that "no major step were made in the Ministry of Foreign Affairs without the authorization of the Election Bureau of the polls from abroad".

English section oprișstswe are the state